Ten years ago, a businessperson talking about preferred pronouns or gender-neutral terms would have been unusual. While it’s easy to poke fun at “woke” culture or participate in hand-wringing over “political correctness,” it helps to think about how language evolves. Many words that our grandparents used freely are now agreed to be offensive. New, more respectful terms replace harmful or stereotypic ones. Why does this matter? Because language can lead to better learning outcomes and policy and behavior changes, making it easier to value people with humanity and inclusion who are different.

Activists strived for decades to promote a worldview that doesn’t frame white, straight, cisgender men as “normal” while everyone else is somehow atypical, deviant, or strange. In the last year alone, companies like Apple and Microsoft took steps to remove racially charged jargon like “master,” “slave,” and “blacklist” from their corporate lexicons. Japan Airlines pledged to replace “ladies and gentlemen” with “everyone” in their preflight announcements. The American Psychological Association (APA) style guide has an entire section on bias-free language.

As many organizations depend on a global and remote workforce, making communication and training as inclusive as possible is more important than ever. After all, there’s no harm in using language that appeals to a wider audience and offers myriad benefits for doing so.

What Is Inclusive Language and What Are the Benefits for the Training Industry?

The Linguistic Society of America defines inclusive language as communication that “acknowledges diversity, conveys respect to all people, is sensitive to differences, and promotes equal opportunities.” Essentially, inclusive language doesn’t assume white, heterosexual maleness as default and tries not to reinforce stereotypes or prejudices.

According to a recent article in Training Industry Magazine, recent conversations around the COVID-19 pandemic and racial justice mean that “Issues of diversity and inclusion (D&I) are coming to the fore…For inclusivity to stick, workplace learning experiences must be aligned with a company’s overall purpose, be tailored to its culture, and support the needs of diverse learners.”

There are obvious incentives for HR and training professionals to make their courses as inclusive as possible. First of all, inclusive and accessible training content leads to more engaged learners. The moment you offend or alienate someone, you risk losing their attention and commitment. Additionally, inclusive language plays a vital overall role in promoting diversity and equity in learning and development. Courses written and designed with a broad, diverse audience in mind translate more easily to international learners, allowing them to feel seen and represented and helping them to become actively engaged in learning.

To promote and use inclusive language, consider these recommendations.

Use person-first language. An easy way to make written and verbal communication more inclusive is to emphasize a person’s humanity first rather than associating them with a specific group or label. Avoid using adjectives as nouns to label people (ex. “the homeless,” “the disabled,” “the poor”). Instead, use adjectival forms (“older person” “gay man”) or nouns with descriptive phrases (“people living in poverty,” “people with learning challenges”).

Use gender-neutral greetings and terms. How often do you hear groups addressed as “guys” or, worse yet, “girls” or “gals”? Our language is full of references that assume gender identity and familial relationships. However, it’s easy to substitute a gender-neutral term (“everyone,” “spouse,” “partner,” “parent,” “teammate,” “sibling,” “chairperson,” “staff”) for a gendered one. Also, consider including transgender and non-binary individuals in your scenarios and visuals. More and more, the singular pronoun “they” is considered grammatically correct and appropriate when speaking or writing about someone who doesn’t identify as male or female or as a term to avoid constructions like “he and she” and “his and her.”

Describe people using identity characteristics only when relevant. Is the person’s age, race, sexual orientation, gender identity, religion, ethnic heritage, or socioeconomic status relevant to the training content or scenario? If not, consider eliminating it. After all, you would never describe someone as a “white manager” or a “heterosexual consultant.”

When in doubt, ask! These are general guidelines, and some individuals and groups may prefer different terms. For example, groups sometimes reclaim a negative word or label as a way to empower themselves. These words may or not be appropriate for an outsider to use. It’s also appropriate to refer to individuals using the gender pronouns they prefer and share your own.

In closing… As the nineteenth-century English playwright Edward Bulwer-Lytton wrote, “The pen is mightier than the sword.” Yes, a cliché by now but an important observation about the power of words. So, why not motivate and engage learners with inclusive language that treats them as individuals and respects them as coworkers. 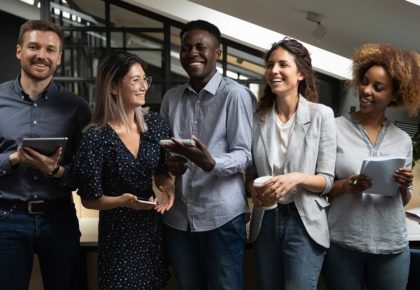 Promoting Equality at Work: If Not Now, When?

In the wake of the murder of George Floyd and other African Americans by police, major US corporations bought full-page ads in newspapers touting their actions in support of the Black Lives Matter movement.

Navigating the Psychology of Working From Home

Is Intolerance Boiling Under the Surface of your LGBTQ Diversity Initiative?

It is encouraging to see a large number of businesses showing enthusiasm for Pride month, when just a few years ago many companies were hesitant to publicly endorse their support for the LGBTQ community out of fear of things like “customer backlash” or “taking a stance.” Many businesses are thankfully no longer afraid to show […]