In recent years we have seen organizations seek greater diversity in executive leadership. Indeed, a 2019 study shows that the number of female executives has grown to 29% worldwide, the highest in history. While organizations of all sizes seem to be gaining knowledge that diverse leadership is absolutely necessary, the inclusion of thought and ideas from leaders of diverse backgrounds still has not caught up. This disparity is often characterized by discrimination plaintiffs being high up on the organizational chart, but without any real power to make change. Recent verdicts and settlements have shown the law’s unwillingness to accept pure “diversity” as acceptable, as evidenced by a recent case involving social media platform Pinterest and its former Chief Operating Officer Francoise Brougher.

As reported by Bloomberg and other news organizations, Pinterest and Brougher settled Brougher’s gender discrimination lawsuit against the company for a whopping $20 million. In her suit, Brougher claimed while she was placed in the company’s number 2 role as Chief Operating Officer, she was never supported nor included in high-level decision making when compared with her male colleagues. Brougher claimed the company’s male CEO relied exclusively on a group of men to make decisions and did not listen to Brougher’s suggestions or points of view. Specifically, Brougher stated “[w]hile I was given a seat at the table, I had no power or I was not empowered to use my talent to move Pinterest forward.”

According to the Bloomberg article, Brougher was encouraged to come forward with her complaint after two African-American women complained of being underpaid by Pinterest and reported equality concerns to the company’s human resources department. When Brougher learned the company found no wrongdoing, she grew frustrated with the organizational culture and filed her own gender discrimination complaint. Importantly, the experiences and complaints of others apparently led Brougher to understand how the way she was being treated was also unfair and that the culture at Pinterest was no longer a tolerable working environment.

While Pinterest’s steps appear to have the organization moving in the right direction, a closer look shows that the remedial aims still are motivated by a desire to become more diverse, both in pay and representation. The subject of Brougher’s lawsuit was the lack of inclusion of her ideas, which is a wholly separate matter that is not remedied by merely “becoming more diverse.” While it is of course essential that all employees receive equal pay for equal work, and women and members of other protected classes should be represented (both in leadership and throughout the organization) true change in culture can only occur when the organization understands that it must not only be diverse, but also welcoming to the ideas, thoughts, and experiences of a wide range of people.

Syntrio has developed a wide range of courses with the goal of improving organizational culture and working towards a more inclusive environment. In addition to its suite of harassment and discrimination prevention courses, Syntrio has a program concerning respect in the workplace, a Speak Up! culture, and a full range of diversity and inclusion courses. We believe that only through fostering an understanding of the importance of acceptance and implementation of a diverse range of beliefs and experiences can an organization truly reach its full potential for positive culture (with the side benefit of a reduction in potentially harmful incidents). We invite you to contact a member of our staff today to demonstrate how we can assist you in this very important area. 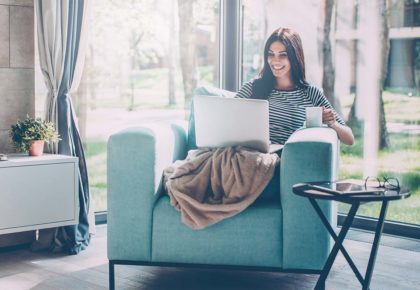 Navigating the Psychology of Working From Home