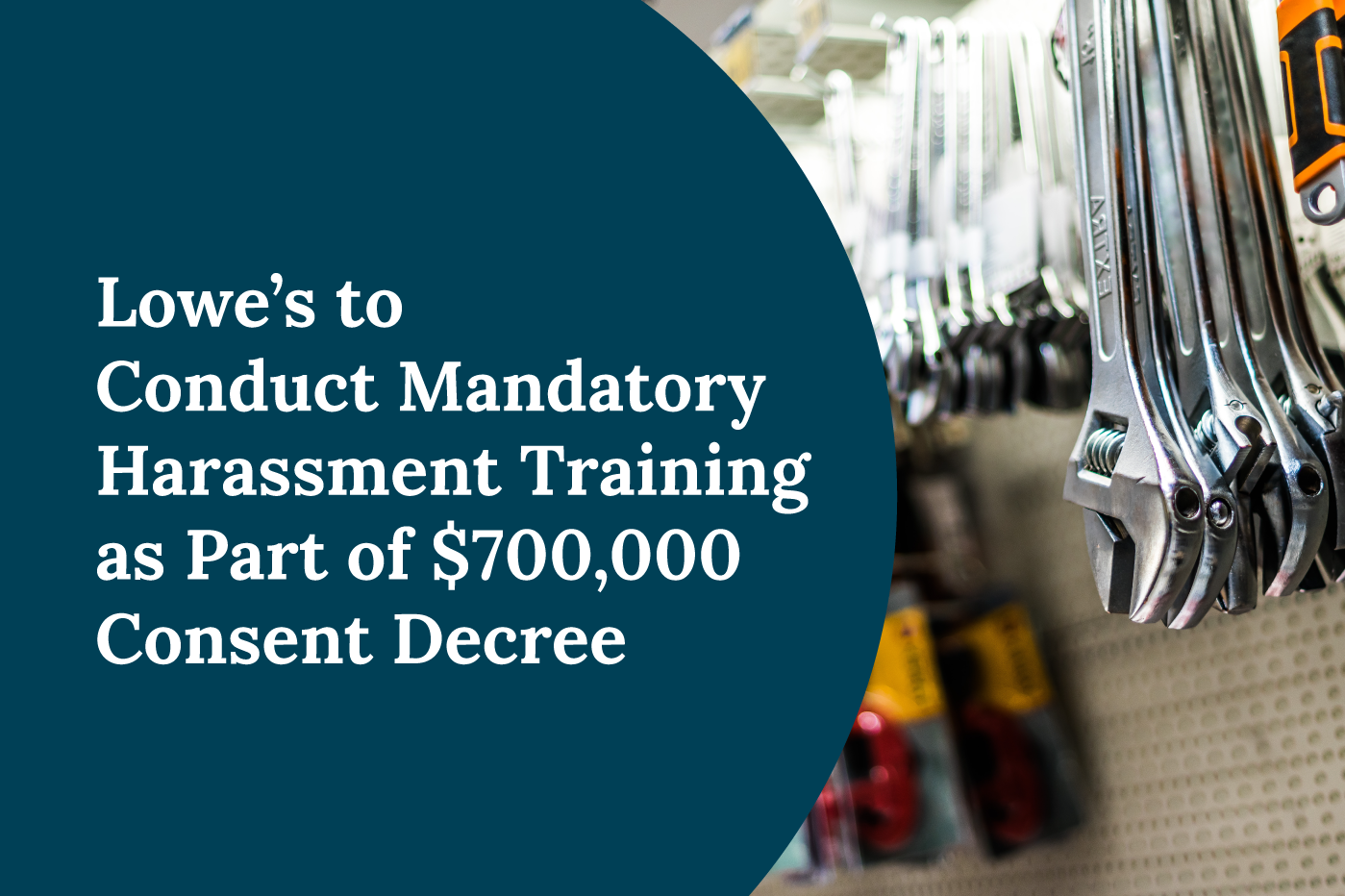 Following serious allegations of sexual harassment by three female employees, North Carolina based home improvement giant Lowe’s has agreed to a consent decree that will require the organization to pay $700,000 in damages to the women and conduct sexual harassment training on behalf of its entire workforce, according to a September 16, 2022 press release by the United States Equal Employment Opportunity Commission (“EEOC”). Prior to agreeing to the consent decree, the EEOC filed a lawsuit after the parties failed to reach a pre-litigation settlement in the conciliation process.

According to the complaint filed by the EEOC in the United States District Court for the District of Arizona, a male Lowe’s employee allegedly made sexual comments toward three female employees (at work) in a manner that was “notorious, open and frequent.” Specifically, the women allege that the man regularly discussed his sex life in front of the women, and referred to one of the female employees as his “lunch.” After each of the women told the male employee to stop the offensive behavior, he allegedly responded by making further sexual comments and gestures toward all three women. The complaint further alleges Lowe’s management and leadership did nothing to remedy sexual harassment allegations after the women all used Lowe’s anonymous hotline and made complaints to managers.

The EEOC’s press release made clear its commitment to training as a preventative mechanism. In the release, the acting director of the EEOC’s Phoenix office stated “[s]exual harassment training, like the training required by this consent decree, is critical in helping all employees understand their federal rights.” The trial attorney for the EEOC made clear that the EEOC is committed to employer action when complaints are raised, as she stated “[t]he EEOC is committed to eliminating sexual harassment in the workplace . . . employers must take action to stop all sexual harassment when they become aware of it so that workers can focus on doing their jobs and providing for their families.”

As disturbing as the factual allegations raised by this case are, perhaps as concerning is the fact complaints were allegedly made through two separate channels and nothing was done to stop the harassment. Important to the resolution of this matter is not only the requirement of harassment training, but the reasoning behind its inclusion in the consent decree. The EEOC keyed in on the lack of response following the complaints, which signals its current focus is in ensuring training provides employees with the wherewithal to make complaints knowing something will be done. Such is the essence of Syntrio’s philosophy of encouraging a “speak up” and “listen up” culture.

Employee Empowerment is a Critical Element of Modern Harassment Training

No longer does providing training explaining what is (and is not) sexual harassment suffice. Instead, employees must be armed with the tools necessary to make proper complaints (through the proper channels) and know how to contact the agencies available to fight for their right to work in an environment free of harassment. As employers, we have a duty to foster a culture where employees are free to make concerns not only without fear of retaliation, but also knowing the employer is prepared to take swift remedial action following a thorough investigation into the matter.

Syntrio’s training and communication philosophy is aimed at improving your organizational culture through civility and respect; expressing zero tolerance for harassment and discrimination; promoting a speak up (and listen up) culture; and improving your organization’s diversity, equity and inclusion practices. Our philosophies align with the goals of the EEOC, and should you be involved in a consent decree situation you can trust that Syntrio’s courseware will meet your needs. Hopefully you contact Syntrio merely seeking to improve your culture and have not had an incident. Whatever the case, we are confident we can meet your organizational goals and provide training that is engaging and thought-provoking, and will leave your workforce confident they are working in a place where the employer provides education that benefits the employees’ well-being more than just the organization’s potential for liability.