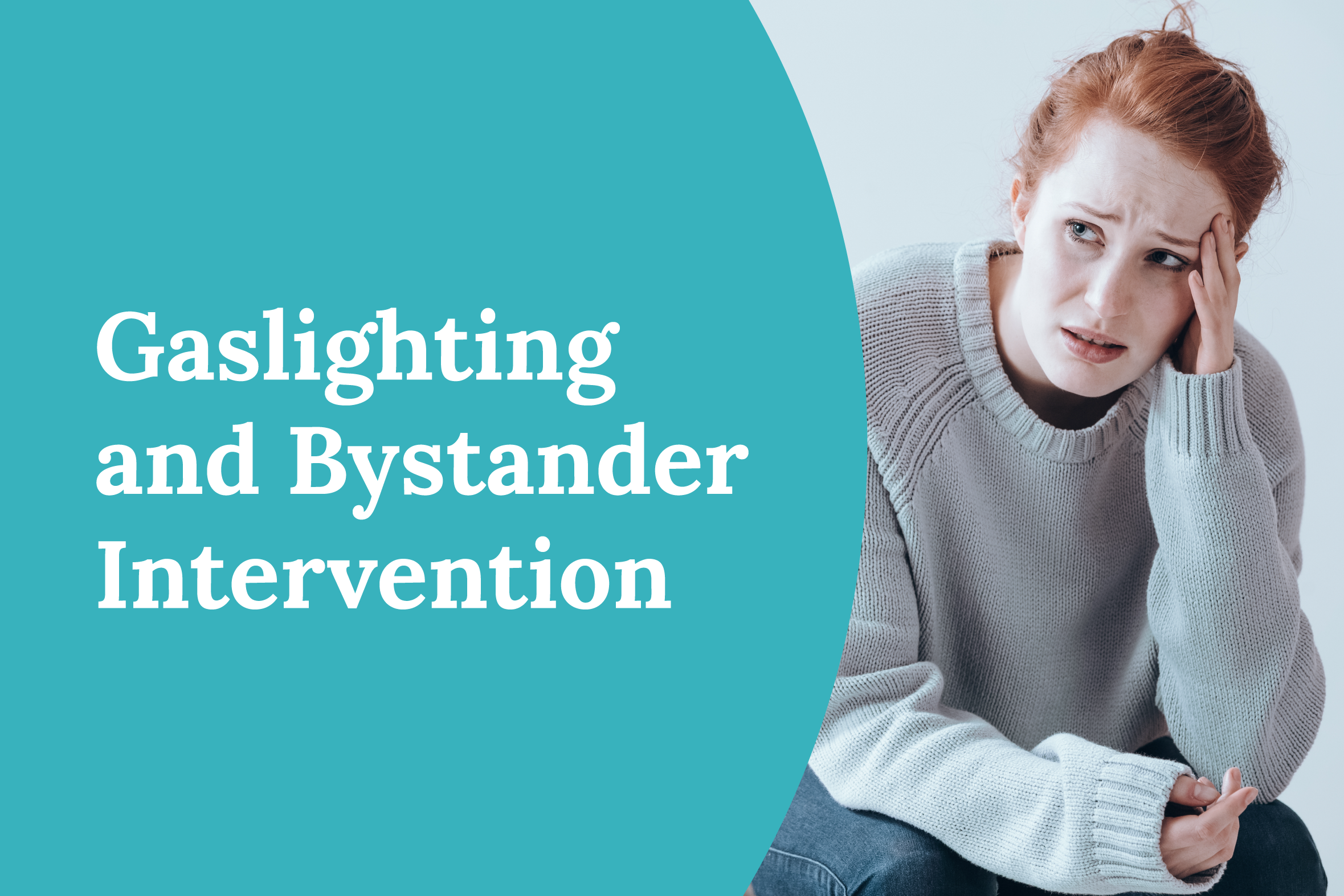 Gaslighting and Bystander Intervention In the Workplace

In situations of workplace sexual or non-sexual harassment or bullying, the offender may attempt to make the targeted person believe they are somehow to blame or deserve the treatment. The offender accomplishes this through gaslighting.

According to Dictionary.com, gaslighting is “a form of emotional abuse or psychological manipulation involving distorting the truth and changing the perception of reality to confuse or create doubt in another person to the point they question their sanity or reality.” Gaslighting is a harassment technique sometimes used by abusers.

The term comes from the 1944 movie “Gaslight,” in which a husband intentionally manipulates his wife into believing she is going insane. For example, he causes the gaslights to dim yet assures his wife it is her imagination playing tricks on her.

Gaslighting In The Workplace

A gaslighter engages in an ongoing pattern of subtle tactics that create a hostile or antagonistic workplace environment, usually focused on a targeted individual. A gaslighter at work may deliberately sabotage a project or withhold needed information. Or a gaslighter may commit harassment but try to convince the targeted employee it was somehow their fault or that they misunderstood the harasser’s intentions. This effects company culture.

If confronted, the gaslighter will try to cast doubt on the targeted person’s motives or honesty or say their story is fabricated as revenge for an imagined slight.

According to a Psychology Today article by Preston Ni, “When approached on the matter, the gaslighter typically denies mistreatment and can become defensive, contentious, dismissive, and evasive. The gaslighter may escalate and become more aggressive or stonewall and become more passive-aggressive.”

A workplace gaslighter may be a manager, coworker, client, customer, or business competitor. The gaslighter may attempt to sabotage the targeted employee for personal gain or merely because they enjoy exercising power over others. Gaslighting may occur from an individual or group. An organization commits gaslighting by downplaying the targeted person’s complaint or implying nothing was wrong with the offender’s behavior.

Some incidents involving religious, sporting, and media organizations’ gaslighting make global headlines due to years of cover-ups to protect critical leaders or the reputation and coffers of the organizations.

For example, in a 2018 interview with GQ magazine, actor Brendan Fraser alleged that the former president of the Hollywood Foreign Press Association (HFPA) Philip Berk, sexually assaulted him in 2003. Unfortunately, when Brendan spoke up about it, the film industry allegedly punished him by severely curtailing his career.

The following from The Guardian details the reaction from HFPA. “After an internal investigation, conducted when Fraser went public, the HFPA concluded that Berk had ‘inappropriately touched Fraser, but said Berk’s action ‘was intended to be taken as a joke and not as a sexual advance.’”

Often when a person complains about harassment and the harasser is a high performer or well-liked by their peers,  others in their organization deny the harassment occurred.

Denial at the Top Levels

When the harasser or bully is a company leader or spokesperson, the organization may let the abuse continue. According to an NPR article by Kat Chow, an organization may say the following to a  person who reports workplace harassment:

An organization’s institutional structure or culture may intentionally and actively encourage others’ disbelief or refusal to listen to the targeted person’s claims. This further compounds the damage to the targeted person as they feel isolated or may even question their sanity. The gaslighter is free to continue and even worsen the abuse with impunity.

This is why active bystanders are so important. If even a bystander stands up and backs up the targeted person’s claims, the organization can consider a different stance and even address the situation.

What are the responsibilities of a bystander?

A bystander can take action by speaking directly to the harasser or bully when they commit an improper act, they can report it afterward, or both. Most importantly, they need to tell the targeted person, “I saw it too. I believe you. And I will back up your claims.”

A healthy workplace culture encourages people to speak up about problems and for managers to listen and address those problems. If gaslighting in the workplace occurs, this erodes the speak up/listen up process. Bystanders have a responsibility and play an invaluable role in keeping the culture healthy for everyone.

Syntrio offers a wide variety of courseware to empower your employees to speak up about their concerns. We welcome the opportunity to discuss how our harassment training and communication tools will help your employees and managers positively address problems. Our 24/7 hotline allows employees to report concerns anonymously if that is their preference.

Syntrio has a series of courses dedicated to bystander intervention and awareness. Learn more today: