2019 found employers scrambling to keep pace with changes to employment laws across the country, while a strong focus on:

Let’s take a closer look at some of the significant changes that took place over the last year.

In August 2019, Illinois Governor Pritzker signed into law a bill requiring all employees working in the state of Illinois to undergo sexual harassment prevention training.

Under the law, which goes into effect on January 1, 2020, employers must annually train all employees (regardless of workforce size) on what sexual harassment is, remedies available to employees, examples of conduct that constitute harassment, and information about the organization’s responsibility to correct incidents of harassment.

The Illinois law is similar to other state laws that are in place, however, one caveat to Illinois’ law that will impact the restaurant and bar industry is a requirement that those establishments train their employees on not just the requirements above, but also use examples specific to the industry (one flagged as “high risk” for incidents of harassment). This requirement follows other jurisdictions, such as Washington State (hospitality and employees who tend to work alone) and Washington D.C. (tipped employees), and may signal an unfolding trend.

In July 2019, New York and California each passed laws adding hairstyle discrimination to the list of protected classes under each of the state’s fair employment laws.

The hairstyles cited by the New York law, and sure to be applicable under the California law, include “braids, Bantu knots, twists, and locs,” among other styles. California’s law is entitled the “CROWN” Act, which stands for “Create a Respectful and Open Workplace for Natural Hair.” The California and New York laws are the first of their kind in the United States and likely mark the beginning of a trend toward protective policies aimed at characteristics “associated with race,” much in the way that sex discrimination expanded to prohibit characteristics and stereotypes “based on sex.” In any event, limitations on grooming policies may pose challenges for employers going forward.

Ever since the California Supreme Court issued its 2018 Dynamex decision, California employers have tried to make sense of whether their contractors must now be classified as employees. In an attempt to clear up this confusion, California Governor Gavin Newsom signed into law Assembly Bill 5, which codifies the Supreme Court’s decision and creates a strict new test for whether an individual may be classified as an independent contractor rather than an employee.

In short, independent contractors must be free to perform their work as they wish, must be in a different line of work from the company contracting them, and must operate their own business. Of course, there are some economic and professional exceptions to the rule. Still, generally speaking, it is now difficult to classify someone performing work for your organization as an independent contractor. Therefore, careful considerations must be made (including the advice of legal counsel) before taking this approach with employees in California.

Maryland Enacts Law Partially Banning the Use of Noncompete Agreements

In late October 2019, the Maryland State legislature joined a growing trend toward the expansion of employee rights in the United States.

Under Maryland’s new law, lower-income employees can no longer be subject to non-compete agreements in that state. Effective now, those employees making less than $15 per hour or $31,200 per year are forbidden from having to agree that they will not work for a competitor or their former employer.

Laws such as this are on the rise. For example, in California, non-compete agreements are prohibited as a matter of law and have been for many years. However, the Maryland law (in a traditionally employer-friendly state) signals a change in belief about these agreements and the burdens they can place on employees looking to find another job in their field. Because non-compete agreements are under fire in many other states (New York and Illinois have discussed similar prohibitions with no legislation yet pending), employers should be careful about placing overbroad, non-compete language in employment policies and/or agreements. First, though, always seek counsel before adding any provisions to employment policies.

On January 1, 2020, Illinois will become the latest state to allow recreational marijuana use under state law. While most similar state laws have specific exceptions to allow employers to limit the use of recreational drugs in the workplace, the Illinois law seemingly conflicts with another statute that states “employers cannot refuse to hire, terminate, or take any other action to an employee’s detriment because the employee uses lawful products off the premises or during nonworking hours.”

Employers can still prohibit the use of cannabis on their premises under Illinois law and make the argument that the use of cannabis is not permitted under federal law. However, the state law as it stands makes it more difficult for employers to argue that an employee they suspect to be diminished at work (due to prior off-premises use of a cannabis product) should be disciplined or terminated. Expect significant litigation and judicial clarity on these issues in the coming months.

These highlighted developments are by no means an exhaustive list of employment law changes in the last twelve months. That said, the list above highlights a legislative expansion in employee rights, something that is indicative of a trend among the states. This trend also signals that what had been a fairly employer-friendly period has come to an end. As such, employers need to buckle up and prepare for more difficult logistical and management times.

As always, preparing a proper program of employee education and preventative training can aid understanding among the workforce of what is and is not acceptable conduct under the law and organizational policy. We strongly recommend consulting with employment counsel to formulate a program of Syntrio’s courseware best suited to your compliance needs in the coming year. 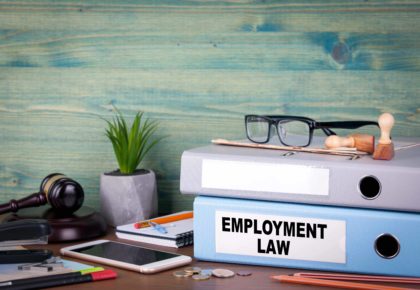 Syntrio strives to keep you updated on all developments in the labor and employment law arena, and specifically those legal changes and legislative activity that may directly impact your obligations to your employees. The following are important news items that you should take note of and ensure your organization is remaining compliant with this ever-changing […]